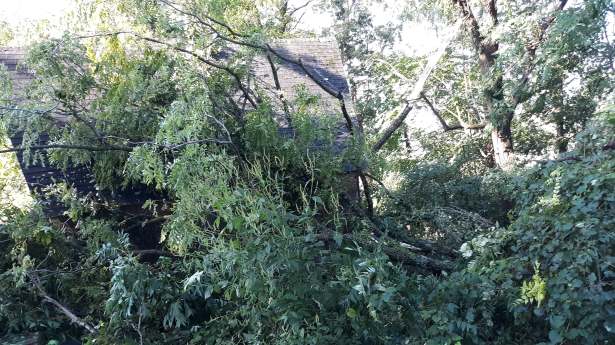 Recently my brother, who lives in the Shenandoah Valley, sent pictures online of wind damage to our family’s homeplace. Trees were down, others still standing but split into pieces. Debris was everywhere.

My first thought was, this is an old family photo, probably from a time after I had left home (Jim is twelve years younger than I). It seemed like an awesome occurrence I should have remembered, so I texted him, “When was this? I don’t recall mom and dad ever mentioning it.”

That surprised me. Although I don’t pay close attention to weather reports, I do watch the news on TV and read the newspaper every morning. It seemed like this surely would have been reported.

Jim texted me again, “It was a microburst.”

“Straight-line winds in a thunderstorm.”

It was a new term to me, so I checked it out. Wikipedia informs me that a microburst is “a downdraft caused by a thunderstorm or a rain shower.” High winds plunge straight down from the cloud bottom, then burst outward in all directions when they hit the ground. Next comes a cushion stage where the wind velocity dissipates. Damages can cover up to two-and-a-half miles.

While the term was new to me, I found it not to be so uncommon when checking the history of this weather phenomenon. I found a listing of 18 incidents attributed either to microbursts or storms that included microbursts and tornadoes. They covered a period from 1989 through 2019, affecting aircraft, buildings, businesses, homes, highways, vehicular damage, injuries, and death. Microbursts can also compromise wind flow across the wings of aircraft in flight, causing the engines to stall.

One incident in June 2010, involved damages from 75 mph winds in Charlottesville, Virginia. Another in July 1012, occurred the Fredericksburg area. Most recently, a microburst caused a crane to topple onto an apartment building in Dallas, Texas this summer.

So, I wonder, how is it I’ve been unaware of microbursts? Could it be that in an era when the internet has shrunken our sense of the world’s vastness, we no longer notice the small things? Perhaps terms like “awesome” and “newsworthy” are reserved for events affecting huge, sweeping damages.

Whatever the case, this was one microburst that hit home for me. In my consciousness, microbursts will never again be swallowed up in the urgency of the awesome clamoring for a loftier audience.

One thought on “The Urgency of the Awesome”